Not every run is fun.

Not every run is like running through a meadow.

Some runs just suck from the very beginning.

Today was such a day.

I think I knew it from the beginning.   I almost walked back in my house after going outside.   Then I thought to myself that if I didn’t go then, I wouldn’t be able to get my run in today.  Besides I was ready to go.  I knew what splits I was looking to hit.   I had my course all mapped out.  I was ready.  I really wanted to get my run in.   Although, truth be told, I regretted the decision for most of my run.  Except, of course, the part when it was over and I knew that I go it in.

I was coming off the rails on this one.   There are several reasons and sometimes that just the way it goes.

First there was the phone call with my mom right as I was getting to go out the door.   Yes, it was 92 today but I have run on hotter days.   The difference is that right before a run I didn’t have anyone say to me, “You shouldn’t run today.   You are going to give yourself heat stroke or a heart attack.”    These are not the words of encouragement needed before a run.   Even though I knew that I was prepared to run in the elements, these words stuck in the back of my head.

Then there was my Garmin which died before I even hit mile one.    This really made me mad because it was on the charger all night.   I’m starting to wonder if my charger is not working properly because this has happened to me before.   I will have to keep an eye on it.   I had toyed with stopping then since I was supposed to be doing a tempo run which is impossible to do without a watch.   Since it was so hot and humid though, I decided to just keep on going and do the best I could.

Then around mile 3, my sunglasses literally broke.   Yes, I knew they were on their way out but really.

My face sums up the way I felt.   Then by this point I was already feeling the pain of the run.   It really wasn’t physical pain but mental.   Part of the problem was the first part of my route did not have as much shade as I thought it did and I was baking in the sun.    Then it got in my head that it was too hot to run.   I kept on going.

One of the reasons that I like to plan a route out is that it doesn’t give me an out once I start.   I was literally 3 miles away and thought to myself even if I turn around I would only be 2 miles shy of the 8 I needed so I might as well stick with it.   I kept on going.   I even toyed with calling someone to pick me up, but I figured I should save that for when I really need it.

Then I got a message from my cheerleader, Dawn, telling me I could do it.   We messaged back and forth and it helped.   I kept on going.   Luckily by then I had hit more shade and although the run was still hard, I was no longer baking in the sun.  I admit that I would run.   Then I would walk when I felt that I needed to.   Then I would run again picking out something in the distance to run to before I could stop again.   Again, it wasn’t pretty.   I was NOT close to any kind of heat stroke except in my head.     I was a hot mess!

Then there was the water situation.    Yes, I did buy a hydration backpack but when I tried it on before my run; I didn’t like it.   I think this cheaper version that I bought might be good for hikes but I could not imagine running in it.  I had my Fitletic hydration belt with all 4 water bottles AND my hand held water bottle.  It was not enough on a day like today.   I should have looped to the park to refill, but I thought that I was fine.   Big mistake.   Then I was on the search for water.

I stopped at a friends house thinking that I would fill with her hose, but she had it hooked up to a sprinkler.  Not sure if it was the sweat on my hands or what, but I could not unhook it to fill my bottles. She wasn’t home or I would have knocked as I’ve done in the past.   Luckily a man saw me sitting, yes sitting, under a tree and gave me a water bottle.   I kept going.   Swung by another friends house and the same thing happened except no nice man to give me water.   By then I was close to home and just kept pushing.

The I realized that for some stupid reason I ran an extra mile.   I did nine instead of eight.   I will chalk that up to being delusional from the heat.

So, no not every run is awesome and some do suck.   But it is these runs that we push are way through that really show us what we are made of.   It is these runs that help to make us better runners.  It gives us the mental toughness needed to push through when running an event when all you want to do is stop.   If every run was easy, then that means you are not pushing your limits.   Life is about pushing limits and getting out of our comfort zone. 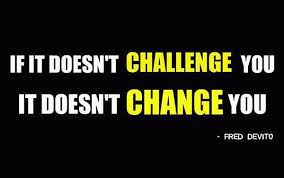 How do you push through when all you want to do is give up?