Never having done a marathon before, I really did not know what to expect regarding how I would feel.  Yes, I’ve read about post marathon recovery and saw the video of the walking dead after the NYC Marathon.   But I still didn’t know how I would feel and I don’t think it’s something that you can fully explain to someone either.

I do know that by the end of the marathon, I was spent.   To the point that while running the last mile, my sister ran onto the course and gave me a rose.   I took it, but then gave it back to her telling her that I didn’t even have it in me to hold the rose.  I really wasn’t lying either because at that point my sole focus was just to keep my legs moving which is harder than it sounds.   The rose just felt too heavy, so I gave it back.   I did take it to carry over the finish line (I think). 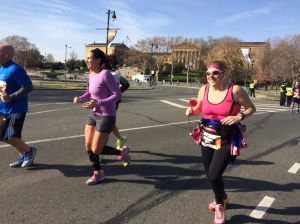 Of course, my legs just felt beyond tired at the end.  Although in retrospect,  I actually think that they hurt worse when Dawn and I did our 20 mile training run.   They felt heavy and tired, but it really wasn’t till I stopped putting one foot in front of the other that the realization came that although I could move forward moving up and down stairs was not easy.  I get it now.   After all those miles of making your legs move forward, they forget that the muscles need to move other ways too.   Luckily that is short term and honestly so worth the pain.

The process of training and running a marathon really is similar to childbirth in the fact that you prepare for the event for months.    You go into it very excited and nervous.  You don’t know fully what to expect (even if you’ve done it before).  The pain starts off small and builds over the miles.   By the end, you are just exhausted and want it over.   Then when your cross the finish line, you realize it was all worth it and would probably do it again.  You don’t forget the pain, but realize in the end it was worth it.

I was lucky too in that when it was all said and done, I limped away with only one blister, sore heels, one sore ankle, and of course legs of jello.   Upon arriving home in the evening, I took care of the blister and soaked in an Epsom salt bath which felt amazing.   Then off to bed  where I don’t think I moved all night.

Then in the morning when I hobbled out of bed and rolled out my legs, I put these shoes on. 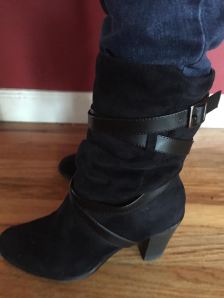 Now these might seem like odd post marathon shoes, but they worked for me.   They took the pressure off my heel and supported my sore ankle.   I wore them all day too!   Maybe this isn’t for everyone, but this seems to work for me as I did something similar after long training runs. I actually did read something about wearing heels and that is why I first tried it.  I like it.   I really do.

Yesterday, I made the mistake of lining up my running shoes as I wanted to see the brands.  I only have 4 pair and two of them are actually over a year old.  I put A LOT of miles on my shoes.   (ok, not compared to some, but for me a lot).

Dear Hubby saw the shoes and even asked, “What do you buy a new pair a month?”

I had to explain that I don’t and that I just keep my old ones.   Now, I could easily buy a pair a month, but I do have some restraint.  Now that being said, I did just buy a pair last month.   I don’t like them.   I still continue to battle foot pain with them.   They really haven’t helped the way I thought they would.   Now to top it off they squeak.   NO, I am not kidding!    It’s not just me either.   My running partners heard it yesterday too.    I think I might need a new pair of shoes.

Now as to why they squeak, last week I went to go for 7 mile interval training.   Grabbed my stuff and headed out the door only to realize that I left not just my headphones at home, but also my socks.   I thought, “how bad could it be?”    I also knew that if I returned home without getting my run in that was it.    I wouldn’t get it in.   So, I ran.   It sucked, but I got it done.   By the time I was done, I had blisters and ended up walking my cool down with shoes in hand.  I’m sure I looked so sassy.    Since then, my shoes squeak.   I may have to powder them, but I can’t keep running in them.   To be honest I don’t think they are the right shoes for my feet anyway.   I wonder if Dear Hubby can understand that.

So how many pair of running shoes to you have hiding in your closet?