Let me just say that this title is probably slightly misleading.

I know some Mom’s who plan “Girl’s Weekend” that involve Vegas or such.

Let me interject that I hate the term Girls Weekend as I am not a girl anymore, but a woman.   I realize that Woman’s weekend doesn’t sound right, but come on.   Can’t we come up with a better term?   What would you call it?

As often, I digress.   Back to the topic at hand.

First there was the picking up of my wing man or wing  lady in this case.   (Yes, you Dawn).    We also had an extra passenger.   A friend of Dawn’s who was going the same way.   So as with most things.   The more the merrier!    Once we were loaded up.   Off we went to the city of Brotherly Love for our adventure.   We follow the Garmin which takes us the scenic tour, but we still get there with time to spare.

Check into the hotel and off we go for some fun! 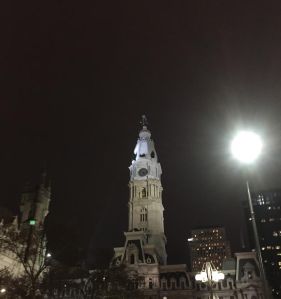 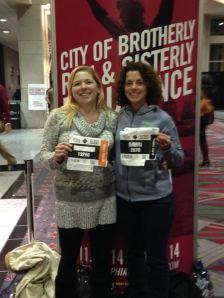 Where you expecting something else?

We did a few loops.  Made a few purchases and met by chance the rest of the MRTT Mama’s who were kicking up their heals in the same fashion.    We parted ways with these Mama’s at the expo as they were going out to eat and we were planning to just grab something quick and eat at the hotel.   The only snag here is when the city is booked to capacity picking up a quick dinner still turns into an hour wait.   So while waiting we hit 7-elleven for some evening snacks.   Probably not best to do while hungry.

Case in point and these are only mine. 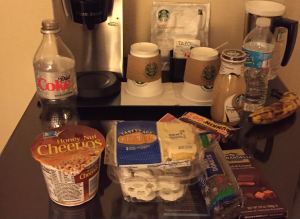 I will say by the time we got back to the hotel to eat, I was beyond hungry!   So hungry that when we met up with the other Mama’s in the lobby that I actually said, “I hate to be rude, but I’ve got to eat”  and then proceeded to shove the food in as fast as I could.   Carb loading at best.   Big portion of pasta with some protien of chicken parm.  Yum!

Then the party continued back in the room.   This is where we got wild.   Going through our clothes putting are final wardrobe into place. 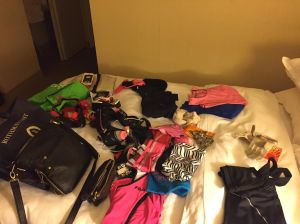 Then off for as much sleep as can be had the night before your fist marathon.

The next morning, I even woke up before my alarm at 4:45 AM.

That really is crazy!

Dress to be out in the cold for a while. 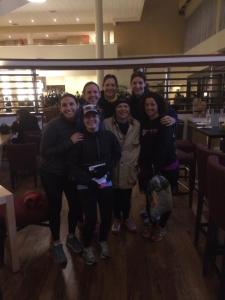 I am what appears to be the homeless person in the middle, but I will say that I was warm.   Especially since I was in a later corral.   The tip here is BEFORE donating old coats, sweatshirts, and such, think will this make a good throw away coat at a race.   If so, put that in a separate pile.   No one wants to start a race off cold and if you are not that vain and have a good sense of humor,  you won’t mind looking like a homeless person.

Especially if by noon you can proudly say

“I just ran a Marathon today!” 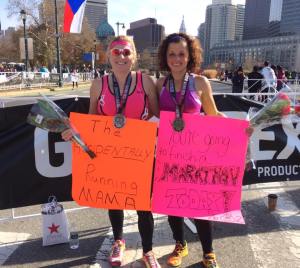 I’ve never really been a sports person.   I never really got the excitement of watching people run around bases or down a field with a ball.   I just don’t get it.    Never having played sports in high school (probably because I couldn’t), I really never got into any of it.   But today I might actually get why people so get excited about watching sports they are not participating in.

My sport of choice – Running.

Today was every runners Superbowl.

I sat here watching people that I don’t know cross the finish line of the New York City Marathon. Watching, cheering, and inspired.  Not only was I watching on tv, I was even tracking several racers that I know too.   I was nervous.   I was excited.  It wasn’t  the elite runners that got me feeling this way either.  Although I am in awe of them.  I was on the edge of my seat waiting for members of my local Mom’s Run This Town (MRTT) group to finish.   We had several moms running and a few husbands too.   I don’t even know some of these people except in cyber world although I may have seen them in passing at a few events.   Some of the Mom’s though I do know.   Some I’ve run with, some I’ve baked cakes for, and some I’ve done races with.    It didn’t matter if I knew them personally or not, we were a team today.

As I said before, I really have never been part of a team.   I decided that I like it.   Our local chapter of MRTT Facebook group was blowing up with excitement of us tracking them.  I wasn’t alone in my excitement either. We were cheering for them from home even if they didn’t know it.  We were concerned about how the weather would effect them.  We were proud of them every step of the way.  We wanted so badly for them to have a good race and cross the finish line.   They all did.

I will let you in on a secret though.   I would bet and bet a lot if one of these women had not crossed the finish line, that they would have been met with nothing but sincere condolences, virtual hugs, and words of encouragement.   That’s what a team does for their teammates.   Not until today, did I realize that I really  had become part of a team.  I am a MRTT Mama runner.   Yes, running is an individual sport, but that does not mean that you are in this alone.

So my words of advice to you….

Find a local running group that you connect with.   All running groups are not created equally, but with the right one you will be amazed at how far you can go.   I firmly 100% believe that if I had not joined this group, I would not have come as far as I have in my running.   I’ve made wonderful friends.   Not just running friends, but real friends.   I’ve been inspired by their passion, dedication, and bravery.   Yes, there is bravery in running.    You have to be brave to not only start running and sign up for a race, but also be brave to know when it is time to give your body a rest and pull from an event or even stop running until your body is ready.   I, actually, think you have to be more brave to do the later.   Either way, it is nice to have support of people who get the craziness of running.

You tell a friend, your feet hurt, you’ve got bad blisters or severe muscle pain from running, they will look at you like your crazy and tell you to stop running.   But you tell your fellow running friends the same thing and they will give you words of encouragement and understanding that only another runner can give you.   It’s a beautiful thing.

Yes, you can run, train, and go to events without the benefit of a running group; but why would you want to!    Your running group may be an informal group too (some people you share your passion with or an online group you follow).   But there really is nothing better than a group of like minded people sharing their passion that will help get you to the next level. 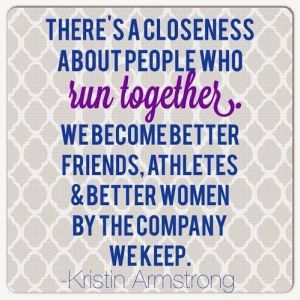 Do you belong to a Running Group and does it help motivate you?

Now, I know that people run marathons, Triathlons, and everything in between for a variety of reasons.   Some do it for the accomplishment.  Some do it for the competitive nature even if they are only competing against themselves.   Some do it, like me, just to say that they did it.  And when I get my medal for crossing the finish line, I just might wear it all the time:)

I also think that some races are more competetive in nature.   Now I’m not saying that the one I’m doing isn’t competetive because I’m sure it is.   But the people that I’m meeting right now seem to be just as much a cheedleaders for other racers as themselves.   Why do I say that you ask?    I will, of course, share it with you.

Tonight, there was an open swim night for women in the Iron Girl (formally Danskin) Triathlon.   My girlfriend and I have decided that we are most worried about the swim and are going to attend as many of them as we can squeeze in.   We go.   We meet another girlfriend there who is not a strong swimmer.   Now I may not be swimming with proper form, do not keep my head low enough, and use too much energy when swimming; but I am a strong swimmer.   I am not afraid of the water. Fingers crossed that actually makes a difference.

We go and get in the pool.   Another woman whom we don’t know comes and joins our lane.  She is even more afraid stating that she hasn’t swum in years.   So we try and give her the pointers that we were given and we all go about our business.   About a half an hour goes by.   We keep checking in with each other.   Commenting.   Giving feedback to each other and encouragement.

The next lane over has a group of swimmers who are doing it right.   Head in the right position.   Looking like they are just gliding through the water not chopping it up like our group.   We strike up a conversation.    One woman is 67 and this will be here 11th race.   Another, 46, is going on her 9th as is the third woman, 56.    We find out that they race together and they are apparently the three musketeer.    What do they then do?   They come in our lanes to give us pointers, drills to improve our style, and hope that we can do it.    They basically ended their swimming time to work with strangers who just happen to be in the same race with them.

Now, I know that not everyone will do such things.   But so far with all the training events that I have been to, this is what it is.   Women helping women.   Women encouraging women.   Because in the end, we really all just want to cross the finish line.    Weather it be in a race or our daily life.   And wouldn’t it be nice, if everyone could be like these ladies and give of themselves just to help.