Yesterday was the Boston Marathon.   This is a day as a runner to be dazzled not just by elite runners but amazing runners with back stories that will bring tears to your eyes. 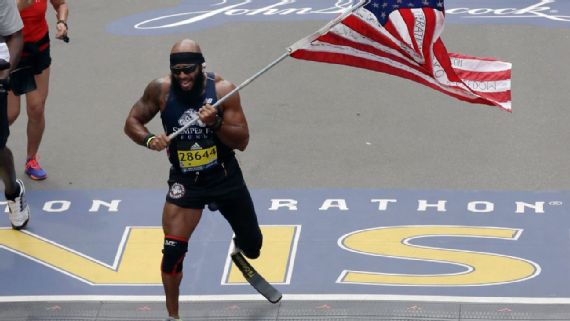 Like Sgt. Jose Luis Sanchez who was injured in Afghanistan and not only finished in 5:46:13 but did so carrying an American Flag sent to him by his unit when he was recovering from his injuries.

Then there are the Amazingly Speedy Mama’s that I personally know that not only BQ’d (Boston Qualified), but then crushed Boston.   They are inspiring in their dedication, speediness, and awesomeness.

I tip my proverbial hat to all of them.

And as of this was unfolding yesterday, a friend shared a blog post that I found very powerful about being a Mom called What if All I Want is a Mediocre Life?

This post struck me as I pretty much lead a mediocre life.   Don’t get me wrong, I love my mediocre life and often joke that I am destined for bigger and better things.   The truth is though that my life is already pretty much bigger and better already.   Besides bigger means more work and I’m barely keeping my head above water now.    I’ve made peace with my “mediocre life” and I actually love it and probably wouldn’t change much about it except maybe have someone else who is better at it clean my house.

Although I never put in in the context the writer did, I have thought about it when it comes to my running.

Am I still a runner?

Do I still get to wear the badge of honor as a runner?

After yesterday’s blog post It is What It is a friend sent me a very nice message.   One of the things she wrote that was so on the money was “Give yourself a break – either mentally or physically.“

She is so right.   I think that I got caught in the cycle of bigger and better and in the process lost a little something along the way.   I have been so focused on the “prize,” the next race, the next distance, the next PR that somewhere along the way I may have run out of gas.      Not the “I’m in a slump” way, but I’ve run out of gas and need directions kind of way.

I’ve achieved a lot in my running in the few years that I’ve been at it.   No joke.   At what point is enough enough?  First it was a Sprint Triathlon. Then a half marathon.  Jumping to the Runner’s World Hat Trick.  Then falling into a  the Philly Marathon.  Ending up at a 50K.  Getting a sub 2 half in NY.   One after another. After another.   I’m not done.   I have goals.   I have dreams and aspirations with my running but maybe for today, maybe for now this is enough.

I admit it.   When I started running, I had something to prove.   Not to anyone else but  to myself.   That I was strong enough.   That I was fast enough.   That I had earned the title of runner.  The problem though became the bigger and better.   The proverbial ring was kept just out of reach.   Don’t get me wrong, I LOVED every minute (ok not every) of pushing my limits and reaching for it all.   Maybe for right now though, I want to just ride the Merry Go Round for a while.

There is nothing wrong with that.

We are all on our own journey.   We all have our own paths to follow.  What is the right path for one person may not be the right path for the next person.   I’ll be honest as I always am, I’m just not sure what path I want to be on right now and that’s ok too.  I’ve got time to figure it out.

and even with all of this uncertainty, I am happy with where I’m at.