As the weekend comes to a close, I’m working on recovering from it.   I went it to it not really thinking that I would need to recover from it.  I was signed up to run my first trail marathon.   I hadn’t trained like I was running for a marathon.  I hadn’t blogged about it at all.  Outside a few of my running friends, I’m not sure anyone knew I was supposed to do it.   I was very ambivalent about it.   To the point that my coach sent me an email the day before asking how I was feeling and also addressing the fact that I had been VERY quiet which she let go because of the holidays.

My reply to her really held no clues as to what I was going to do or how I was planning to do it either.

“Yeah, I know I’ve been under the radar lately with this trail race.   Things seem to be settling into the normal crazy routine.   I’ve probably been quiet because I’m really a bit ambivalent about this weekends event and really even today just planning to see how it plays out.   I’m thinking because this is not one of my goal events for the year and it is also a place I frequently run at that is causing the lack of excitement.  I also am going into this knowing that even though I could probably run the marathon distance,  I won’t if tomorrow I feel like it’s going to cause me problems for NYC Half training.  This is not to say that I’m not going into it not wanting/planning to run the full.   It just means that I plan to listen to my body.   In saying that I am do not mean that I am expect it to be a piece of cake.   Again, very ambivalent. “

I’m sure after she read my email, she scratched her head and was wondering why the Hell she is coaching me.

I really was planning not to plan and just do a wait and see approach.   That being said though, I did decide to pretend that I was really going to run a real race.   I carb loaded the night before with some yummy Mac & Cheese and chicken served with a side of bread.   I packed my bucket for the event.   Yes, a bucket.   It was a great suggestion from a running friend, Mary, whose hubby is a pro at these things.

I got to the event and met up with my fellow MRTT Mama’s and friends.   We took the required pre-race pictures!

We were all running different distances, so we  only got to cross the start line together.   I’ve run all my big events by myself.   I’ve also done many of my training runs by myself.    Even so, I still didn’t know what I was going to do.   Part of my mind was thinking that I would just do the 30k and be happy with it.  Part of my mind thought that I might even settle for the half and recognize that was ok especially since I hadn’t been running tons in December.  Then something changed along the way.

Now what changed me from being ambivalent to actually running a marathon?   I’m not really sure.   I think what helped was that in the very beginning I met a fellow runner who I was able to fall into not just a good running pattern with but I was able to chat away the miles with.   She has her own amazing story which isn’t mine to share, but I will say that she has run over 40 marathons, 50K’s, 100 milers.   She is a true Ultra runner. More importantly she was someone who  made the miles go by easily.    So we ran almost 3 laps of the 4 needed for the marathon distance.    She was stopping, but I felt strong.   I felt like I had more in the tank.   Also my mindset somehow changed from ambivalence to “I want this.” I was so close how could I stop?

I recently had a conversation with a friend who had lost her Mojo about how to get it back.   With the New Year, she was starting back with her running.   She was doing it, but her heart wasn’t in it yet.   I told her that she just needed to keep going until one day she realized that she once again had found her Mojo.   I told her to fake it until she felt it and I guess that is what I did at this trail race.    Sometimes, you just need to show up for the magic to happen.

Since I went into this event with no thought, no plan, no idea; I had no pace or time in mind.   So when I ran it, I just ran it.   I wore my watch but I really didn’t pay any mind to it other than when it would beep the miles away.    That being said, my laps were consistent.

I even stopped at the end of lap 3 to take a picture or my running buddy and then some more pictures on the trail. 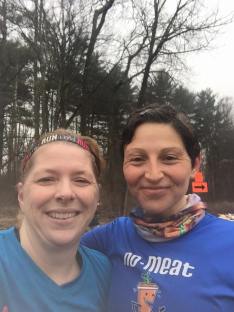 In the end, I am glad that I went as I really had thought of bailing.   The trails as always are beautiful, peaceful, and bring me happiness.  In the end, I am happy with my official time of 6:30:08.   My actual running time according to Nike+ was around 6:18 which I can’t believe.   It boggles my mind to think that I ran that long, but numbers don’t lie.   It also gave me a big confidence boost for the Dirty German 50K as even though I was VERY happy to have finished, I felt like I could have gone more.  Maybe not happily, but I could have if needed.

It was a good day all the way around.   I am so glad I went and I’m even happier that I finished especially when my running buddy Dawn puts it like this about me, she “is always pushing me to take more chances and to go for it. She put her money where her mouth is with a great marathon at Watchung!”

And truth be told, I couldn’t do it without the encouragement that I get from my running and non running friends.

The funny thing is when it was all over both Dawn and my Coach were not surprised that I did the full as that was what I originally wanted to do.   Dawn said I’m too stubborn to back down and my Coach just said that she knew it.

Have you ever gone into a race not caring about the outcome?