Shockingly I went for a run today.  I have to say I was a little cranky on the run.   I didn’t start off that way, but by the time I hit a half a mile, I became very cranky and if I had written this post while on my run there would be a few curse words involved.   Why you ask when running usually calms me?

I was running along my normal route.   Hugging the curb of the road as I always do.   Ask anyone who see’s me running.   I am not running in traffic.   I am always very safe and cautious as I like to say that my goal is to come home safe after every run.  .   Running towards traffic with no headphones on.   Doing all the things that I am supposed to be doing when a car seemed to be heading towards me.   I even jumped up on the sidewalk because I wasn’t sure where he was going.   I’ll be honest it wasn’t a “close call” ONLY in my mind and only because I was paying attention.   I jumped up on the curb at the same time the guy swerved.   It scared me though.  Not sure why he didn’t see me, but I would venture to say that he was distracted.

Then I noticed something else tonight.   There seemed to be lots of distracted drivers.   Not sure if it was the time of day I went out since it was 5:00 pm.   Maybe at this time of day, people aren’t paying as much attention because they are in a rush to get home.   But I did notice on more than one occasion, drivers hugging the white line or even over the white line where I am running again hugging the curb.   What’s up with that?    It actually got to the point that I became pissed.   One driver, I actually pointed to the line and yelled there is a line for a reason.   It was ridiculous.

Now there are those usually non runners who will ask,

“Why not just run on the sidewalk?”

I’ll be very frank here and say because the sidewalks suck!

The only time I ever fell running was when i was on a sidewalk.

Here are a few exhibits from today’s run. 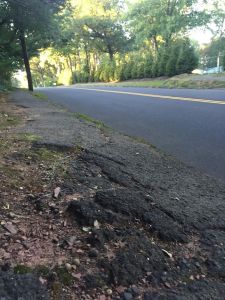 Yup, this is a reason that I don’t run on sidewalks usually.   You can see why I would choose to run on the road instead, can’t you?  I find it safer.

That being said why is it so hard when I am hugging the side of the road for drivers to stay on their side of the line.    They need to stay where they belong and I will stay where I belong.  I’m really not out there to annoy you and I know that in a game of chicken you are the only one walking away.    I do everything in my power to stay safe.   Can you do me a favor and maybe do the same?

So when you see me with my head held high and my feet moving across the ground,

My presence may annoy you
but

I am Someone’s
Mother
Daughter
Wife
Friend
Everything
PUT DOWN YOUR PHONE!
DON’T LOOK AT PAPERS!
PAY ATTENTION!
I am there for Me,
but my family wants me home when I’m done.
This concludes your PSA for the day?