Yesterday, this non morning person woke up at 4:40 AM.

On Purpose, no less.

I, shockingly, was happy to get up because that meant it was race day.   My first NYRR race for 2015.   My first event on my quest to qualify for NYCM.  Plus, I was going with a bunch of Mom’s Run This Town Mamas and that ALWAYS makes for a fun morning.

It was warmer than I thought it was going to be,

I worked out my layers pretty nicely if I do say so myself and I do.

On top of all my layers, I had gloves, a Gaiter neck scarf, and my cute hat that I borrowed from my sister.   I think I may want to keep this hat now, but I think I might need to negotiate that.  She lives in sunny California where this hat is not practical at all.  She also ran a half marathon yesterday, but she didn’t have to worry about layers either.   We are going to here from her tomorrow as a guest blogger:)

As far as all my layers, I think I hit the money.   If it had stayed colder, I would have been perfect but it did warm up to a balmy 35.    So things did come off.   It might have been because my hat was so warm, but there was no way I was taking it off!  I would have had such hat hair!!!! 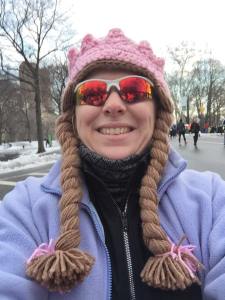 Although my husband didn’t think it was that cute, I did (and that’s really all that matters).   I also got many compliments on it at the race.   My Godmother bought it at a church bazaar because no one was buying them and she felt bad.   I told her that the woman needs to skip the church bazaars and market herself to runners.   We are a fun group and I think she would sell many!  Then again that’s not a good idea because it’s fun having something different.

Anyway, because my cool hat kept me so toasty warm the Gaitor and gloves came off by mile 2 and were put into the roomy inside pockets of my jacket.   Then I impressed myself by taking off my Heat Gear shirt without removing my jacket or stopping.   Another reason to love wearing my Fitletic Belt because I tucked the shirt in the back of the belt and didn’t notice it all race.    Then unzipped the jacket about mile 8 and I was good to go till the end.   Then once I finished, everything went right back on with a nice heat blanket handed out at the end!

I would say that is pretty good.

I did change up my running a bit.   Not on purpose, but due to lack of training.   I did some walking.   I would push myself up a hill and then allow myself to walk for a short bit.   It was a nice trade off and I really like this option.   I’m not sure if I would do this every race, but it is nice to know that you can have a decent finish and still walk if needed.

We had a big group from my local MRTT there too.   We drove in two separate cars and met in the city before the race.

There were 8 of us and we all went into it thinking we would be running like a training run and pretty much together.   Although we did finish within 10 minutes of each other; we did spread out some because ultimately you need to run your own race.   There were no hard feelings as we were all on the same page.   Then when we were all done a trip to Magnolia’s Bakery for a treat before the ride home.

I really think that I am going to have a fun time running in New York City!

Did you race this weekend?