I’ve got this little thing coming up in two weeks.

Just this little race that I recently signed up for.

It is literally 2 weeks from today.   Let’s just hope that by this time of night I am actually done running it and am soundly asleep!

I was talking to my friend who I am doing Philly with today.   A couple of the women who were signed up to run it won’t be doing it now.   Can’t really blame them at all seeing as they just both ran in the NYC Marathon.  They both were amazing and rocked it!  One even qualified for the Boston Marathon.   They have more than earned their weekend at home and are most definitely excused even though they will be missed!

Me on the other hand, I’ve got no excuse.    Yes, I haven’t been plotting this run out for a year, but I think (hope) I’m ready.   I’ve been following my training plan and doing what needs to be done.    Yet, the doubts still creep in.   The “What was I thinking?” doubts.  I don’t know why.   I think it might be normal or at least normal for me.    To be honest, I think my legs will hold out.   It’s the feet and mind that worry me.    Running really is a mental game.   Many don’t realize it, but it is.    The body will do what the mind tells it to do.   If the mind tells it to give up, it will.   If the mind tells it to keep going, it will.  They key will be making sure my mind doesn’t give up.

I’ve got to work on my Manta.

My normal – “You’ve got this” won’t really work in this situation.   How am I supposed to know that I’ve got this when I’ve never got this before.   So that one is out.

I think I’m going to go with – “Don’t think and just let your legs carry you.”

In the whole scheme of things it really amazes me how far I have pushed my running in the last year.   I didn’t run my first half until May and since then I’ve run two more and am getting ready to run my first marathon.    It boggles my mind.    If you had EVER asked me if I would ever run a marathon, I would have firmly told you that you were crazy.    Whose the crazy one now?   I guess me because I’m going to do it.

Part of me thinks that this might be my one and only marathon, but then there is the other part of me that knows this is just the beginning……. 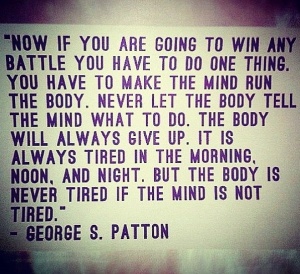