Sometimes we need a little extra motivator.   We live in a virtual world, so why not let a virtual “race” motivate you to get out the door?   I will admit that I do enjoy the feel of an actual race, but sometimes that is not an option.    I will also admit that in the past I may not have given these events the respect that they deserve.   Really though if these events motivate someone to get out the door, why not?  Besides they are a lot more cost and time effective than other events.  Plus as with anything in life, you get out of it what you put into it.

I belong to many online running communities where I have and probably never will meet these women who inspire me.   I had an online running coach who I only met for the second time at the NYCM.   We do so much online anymore that virtual reality mixes in with the real world.   So why should a virtual race be any different.

I recently signed up for Pi Day 5K event.   The beauty of these events is that there is an online community to share your “race” with.   Plus you can actually get a medal if you choose.   I will say that I liked the medal, so I went for the whole package.

Who doesn’t love pie?   I mean Pi Day.  Although I am not a math lover, I think it’s kind of a cool play on the word pie.   I might like it more for the word play than the actual math, but don’t tell my friend.   So what is Pi?

You know what?   That’s all I know about this type of Pi.   I have no idea what it is used for and why math people love it so much.   Now the other pie I know a lot about, but I digress.   Anyway, I thought the medal for this virtual race was really cute and I liked the idea of my own personal race. 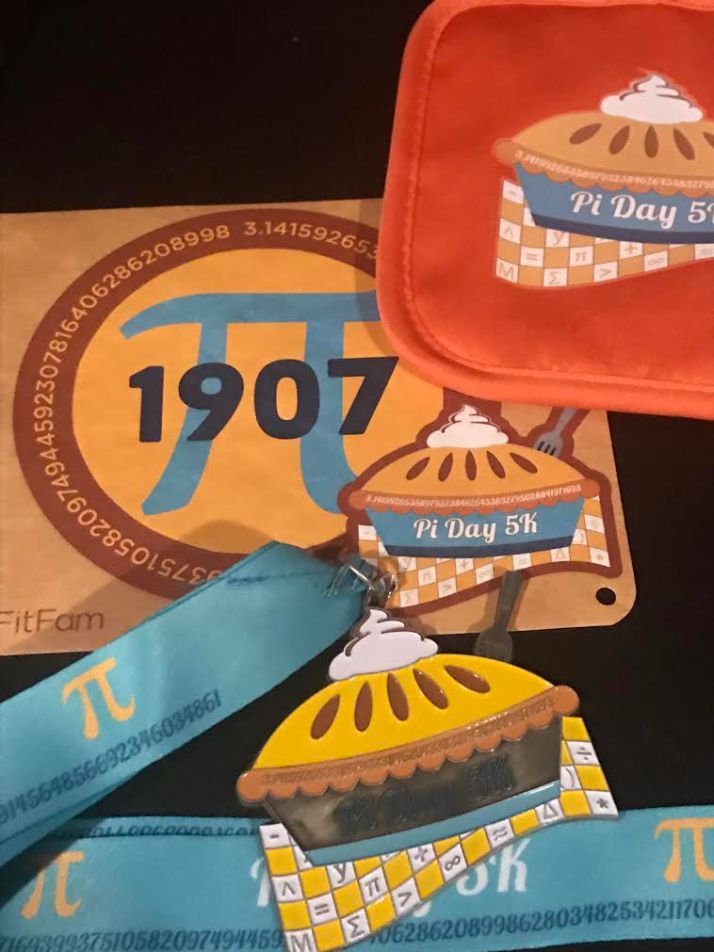 Now I know the official Pi Day isn’t until Tuesday March 14 (3-14), but we are supposed to get a BIG, BIG,BIG snowstorm Tuesday.   So yesterday I decided to do my Pi Day 5K.   You know what?   It motivated me to run and run fast.   Now if this was an actual 5K with other racers around me I might have not walked a time or two, but I still don’t care.   I ended up having a really good run.   Probably the fastest run that I’ve had in a while.   It was a great motivator to me when I was finished.   Isn’t that what it’s all about?

It was meant to be.   Kind of cool too that my calories were exact.   Could not have done that if I tried.

So even though I really don’t care about Pi (shhh), virtual events can be motivating.   The bottom line really is that if it is something that will motivate, inspire, or push you; go for it.    Because in the end, all that really matters is what will get you out the door.

DO WHAT MAKES YOU HAPPY