It was an amazing day that started off at 5:45 AM  with a van ride with a bunch of amazing women to Staten Island.   Couldn’t ask for a more inspiring group of women to spend my time with.    Once the van dropped us off all we had to do is wait and wait and wait some more.    My wave didn’t start till 10:40, so it does make for a long day.

But an awesome day.

You’ve got to have fun while your waiting:)

Then off to the corrals and they really are named correctly.   We were herded in like cattle, but no one seemed to mind.  Luckily for me one of these Mama’s was in my same corral and wave!

Then we were off!

As I said before, I was going to run this race with no regrets and I have none.   Did I get my 4:30.   NOPE.   You know what?   It doesn’t matter.   You’ve got to have goals as a fiend told me yesterday.   These were big goals as far as my spotty training goes.   I had a plan.   I had paces and you know what it all went out the window when I was running.

I am the cautionary tale.   A marathon is a whole different beast than any other road race.   Pace is key.  I know this and yet I seemed to not care yesterday once the race started.   That is why it is important to run a marathon different than lets say a half marathon.    Well, I didn’t:)   I went out the first two miles as much faster than expected and then it went out the window. 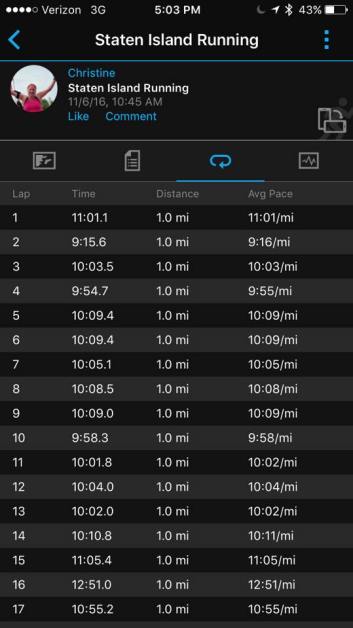 I let the crowds carry me.   I bought into the feeling you get at the beginning of a race of “I feel amazing”  and “this is awesome!”

This is the face of someone who is feeling good.    But that feeling can only last for so long when you run the first half like you don’t still have 13 miles to go.    I ran the first half in 2:09 and change.    As expected, the second half was much slower.

I have never hit the dreaded wall before in a marathon, but I think that I can say that I hit it yesterday.   And right where they tell you that you will hit it – Mile 20 I ran a 14 minute pace.   My bad.   I must also say that ran might not be the right word.   I walked a decent amount the last few miles.  I really had nothing left to give.   My legs were like lead, my hands and lips had the tingles.   I was honestly afraid I would pass out.   What kept me moving forward was the thought that if I stopped that I wouldn’t start again and if  I passed out I wouldn’t finish.   Finishing was all that mattered!.   So onward I went.   I walked when I needed to and I ran when I could.

It was during this time that I realized even without making my goal, I had no regrets.   None!   I set out to finish and I did.   As I said to my friends, you can’t really say it’s a bad day when you can say you finished the New York City Marathon.  I am not just saying that either.   It was a great day and I am blessed beyond belief to be able to say that I did this amazing race.

Yes there is more to the story, but it is now time to soak in some bath salts:)

How was your weekend?