We all makes mistakes.   We all look back and think well I should have done it this way instead of that way.    These same things apply to a marathon.   Some of them although not the correct choice for the marathon were the correct choice for a weekend away with my Mom and sister that I’m not sure I would change.   If I was racing for the win, yes but I’m only running for me.   The journey is just as important.

Not knowing the city or the lay of the land which would be true for any destination race does make it difficult.   I did what I could.   I got the hotel, Sheraton Pentagon City, from the Marine Corps Marathon list of hotels.    I went on Google Maps to try and get an idea of where it was in relationship to everything.   It was a little apart, but it was also a little more reasonable priced than those right in DC.  Don’t get me wrong it was a beautiful hotel with very comfy beds, and an easy shuttle service to Metro.   The downside is that once the race was over we then had to navigate a way back to the hotel to get my car.   My sister checked us out and packed the car before they went out to cheer along the race.   When it’s all said and done though I think the comfy beds were a good choice.

My second mistake with the hotel though is that it would have been nice to stay over the actual night of the Marathon.    BUT I am a mother of three boys and a husband who works long hours, so I needed to be home Monday morning.    The real downside to not having a hotel to go to after the race is that I had nowhere to shower.   Now I don’t know about you but I don’t normally smell that sweet after a 5K let alone a marathon that I got rained on some.    I did manage to change and wipe away some of the grime, but I really did not feel human again till I got in a shower at almost 9:00 PM.    Best shower ever!

One thing that I did do right with the hotel though was to go in on Friday instead of Saturday.    This way, we were able to get up at leisure Saturday morning and feel rested for the day.   I think if I had to choose going in a day early is better than staying a day later.

I’ve never been to DC.   My mother hasn’t been since she was in High School.  This made us want to tour the city especially because I honestly don’t know when I would be going back.   Would love to, but don’t know when or if that will happen.  There is so much to see in such a short time.   I think I only saw 1% of it before the marathon and honestly during the marathon I probably missed a lot too.   But even with only seeing a small portion of it, I probably walked 6 miles on Saturday.   Probably not the best thing to do the day before a marathon. 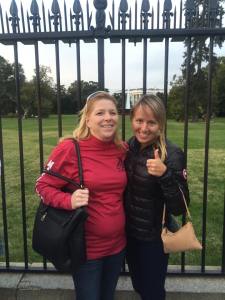 My sister’s boyfriends pre race plan includes spending the day watching movies and lounging.   I made fun of him for this, but I think there is something to this.  Although I do think that is to the extreme.   Maybe we should have found a happy medium where we toured in the morning, but made in back to the hotel before 9:00 PM.    We could have sat by the pool in the afternoon.    Although again, I’m back to I wanted to see DC.   So it’s a choice you have to make.   I’m happy with mine and I can live with it.   Besides, I got to see some amazing sites.

This is the part that I would and will change in the future.   Since we were being tourists, we really didn’t know where we would eat.   We just played it by ear.   This was a BIG mistake.   Although we found a great Irish Pub for lunch that was super yummy, we did not have such luck for dinner.    The appropriate places were few and far between as I did not want to eat anything out of the ordinary and spicy.   We walked and walked and walked searching for the elusive perfect non fancy, non spicy place to eat.   Finally we just gave up and went into one.   I ordered what I thought would be the best choice.   On the menu it really was the best choice, but when the dish came I really did not enjoy it.   I ate what I could as I knew that I needed to eat.    It wasn’t enough.

The funny thing was that at this point my sister was meeting a friend who lived in DC and my Mom and I were going to take Metro and the shuttle back to the hotel.   We get off the Metro line and sit down to wait for the shuttle.   Look up and literally across the street is a California Pizza restaurant.   Seriously.   We run over grab something to go and race back to catch the shuttle.   By this time though, I really don’t want to eat but do manage to eat some more of the yummy pasta.

When I told my coach this, she said this is why she always takes food when she is traveling to an event because you never know.   She said some people think that it is strange that she travels with food, but I think she might be onto something here.    Either that or next time, I will make reservations!

As some of you know, I got into Marine Corp through the lottery.   I personally did not know anyone going, so I would have been flying solo without my family.   I do remember though that the first thing my Mother told me when I got into the marathon was that she was going with me.   Then my sister decided to join in on the fun too.    They made the trip so worth it.    Jen, my sister, even commented on how sad it would be to be there alone.   She is so right.   I could not imagine crossing the finish line and having no one to share it with.  Besides it made for an awesome girls weekend!

How do you plan for your destination races?

So to my 3 year old class, this maybe wacky hairdo to celebrate Dr Seuss week but to me it just feels like I’m channeling the 80’s 😂😂😂
Parenting is hard no matter how old your kids are.... so enjoy it:) #momlife #momofboys
😂😂😂