As you know, I’ve started transitioning to morning running on days that I can or truthfully days that I’m motivated to get out of my PJ’s early.   What has really helped is meeting friends.   Hard to not put on your running shoes when you know someone is expecting you to run with them.  Plus it really is a nice way to start the day – chatting with a friend.    I used to do this over coffee.   Now I seem to do it over the miles. 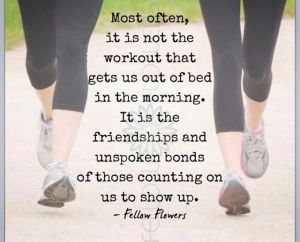 Yesterday was another such day.   I had another 9 miles on my calendar which really is nice to get out of the way earlier in the day.   It does remove that feeling in the back of my head telling me and wondering, “you’ve got to run” or ” When are you going to run?”    Plus, I live with a family of late sleepers.   If I’m lucky, I usually can get out and back in before anyone even notices  depending on the run.   Great thing about this run is that not only was I meeting Genine again, but Dawn was making a guest appearance!   I haven’t seen or run with Dawn I believe all summer long.  Not sure how that happened with the exception of we both have a house full of kids, she works, and we’ve got a lot going on.   September is right around the corner though which means that we can settle into a normal routine.

I was scheduled to run 9 miles again which seems to be my new norm I’m realizing with various paces and such.   This run was supposed to be at a 10:40 pace witch is slightly faster than my easy runs of 11+++.      Both Dawn and I were excited to run together, but for some reason she was doubting if she would run the whole 9 at the 10:40 pace.   I’m not really sure why she was doubting it because she is much faster than she realizes it or at least cares to admit.   She more than proved that today as we kept a rocking pace the entire run and only stopped for a potty break at mile 3 and a water break around 5 1/2.   Other than that we kept on trucking.    Since Dawn wasn’t wearing her watch as is her norm, I was the time keeper.   That being said, she set the pace for a most of the run and I just monitored it.   There were several times that I needed to tell my friend to slow down as she was moving way to fast. 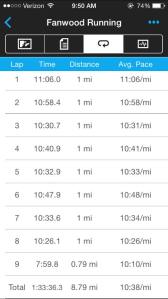 Not only was it a great run time wise, but it was a great run because I got to run it with a friend.   During the run, Dawn said something that was so true when we were talking about marathon training as she’s training for NYCM.   She was saying along the lines about how I’ve been running so many miles lately and you just can’t do that many alone as it’s a mental thing.   It really is true too.   Yes, I do like running alone.   Yes, I do like running with friends.   They both have their advantages.   The biggest advantage to running with friends though is that the miles really do not seem as long!

Then I come home and post my run on a running group that Dawn and I belong to.   She posted this in response

“A running friend will run with you; a real friend gently guides you for 9 miles as you talk yourself into what you can do until you believe what she already knows.”

All I can say is that one of the best things that running has brought into my life besides killer calves is the friends that I have made along the way.   Sometimes as Mom,  many of your friends are parents of your child’s friends.   That works when they are little and you have to go everywhere with them, but as they grow those friendships change as everyone gets caught up in their daily activities.   It doesn’t mean that you aren’t friends, it just means it’s harder to find time to see them.   It is nice to have friends that are forged over the miles and that will stand the test of time. 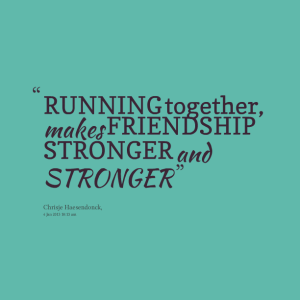 Do you run with friends?