I’ve been to many races by now in my running “career,” but never in a volunteer capacity.    Now that I think about it, I don’t think that I’ve ever even been to a race just as a spectactor.    Kind of sad actually.   My sister once said after watching the NYCM, “If you ever want to be inspired, just go watch a marathon.”   Even though I do agree that a marathon is inspiring, really inspiration can come from watching any race.   It was nice to be on the outside looking in for a change.

I will also honestly admit that I did not sign up for this volunteer position just to be inspired.   I signed up because as part of the 9+1 program, I am required to either volunteer at an event or raise $1000 for charity.   I opted for the volunteer position and I’m glad I did.   It think every runner should volunteer at an event at least once to see what goes into it and I really only peaked behind the curtain and still have no clue as to what goes into it either.   What I do know is that behind the volunteers are a whole event staff that worked hard to put it together.   I couldn’t even begin to tell you about that, so I will tell you about my teaney-tiny small part I did today.

First of all I had to find an event to volunteer for through the NYRR Organization.   I came across the France 8K and signed up.   Luckily one of my MRTT Mama’s also signed up as I really don’t know how I would have made it there without Elaine.   Although, I am not afraid to drive in the city, I don’t know the lay of the land nor how to really get there.   Elaine used to live in the city and she understands the streets and parking in the city.   She offered to drive which I am so thankful for. Yeah, Elaine!

One of the downsides of volunteering is the arrival time.   We had to be there to check in for our assignments at 6:00 AM.    Now being as we live outside the city, this meant leaving at 4:45 and waking up at 4:00.   You may have hard me crying as my alarm went off this morning, but I really am not complaining.   I know how lucky I am to live close enough to the city to even chase the dream of running the NYCM.   So I will wake up at 4:00 AM on more than one occasion if it means that I will one day have the privledge of running 26.2 miles in New York and saying I ran the NYCM.   (You know your a runner if you get that).

At check-in Elaine and I had to go our separate ways as we had different assignments.   She was amenities and I was West Side Course Marshall.   I know sounds very official, doesn’t it?   Really what that means is that I stood along the course keeping people on the right side of the cones and keep those not racing on the left.    Really not difficult. 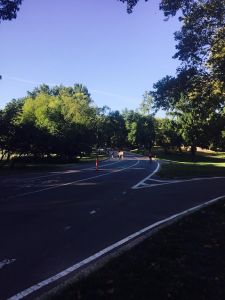 Then the race started.   As I stood there watching the front of the pack fly by, I really didn’t know what I should do.   I felt silly just standing there, but my friends may not believe this but I am actually a very quiet person (I hope noone spit out their drink when they read that).    It is the truth.   I am quiet UNTIL I get to know you and I’m usually quiet in groups too.  So as I stood along the course, I had to step outside of my comfort zone as I know how when I’m racing that the encouragement of the volunteers is so helpful.   At first I started off a little tentative.   A little clapping.   A little “nice job runners,”   “water around the corner,”   “ect, ect, ect.”    By the end, I was doing the booming clapping and hollering.   I got a few smiles, I got a few high fives, and I got a few thank yous.    I didn’t want to just stand there like a dud even if that would have given me a check.

I’m not sure if I helped anyone running by, but I know in some small way I did help one female runner.   (Sorry male readers).   This one woman runner came up to me and asked me if I possible had a tampon.    Luckily for her, I did have one.   By the look on her face, I know that I helped her and that she did not want to make a statement like that woman in London which is a whole different blog post.   For now, I will say there are other ways to make your statement.   Anyway, I’m glad I could help a sister runner out.

I will also say that I made sure to clap just as loud for the very last runners as they in my opinion they need more encouragement than those running to win.   Today the last runner was a very obviously pregnant runner who had pinned baby on board bumper stickers (I think) to her shirt.   She was working it, but she finished!

After the race, I had to walk back to return my lovely volunteer vest and badge.   It was a long walk, but so glad that I did it.   I have run in Central Park a few times now, but when walking you get to see a little more.   It was a beautiful day, the sun was out, and I was enjoying my rest day and the fact that I have one more check. 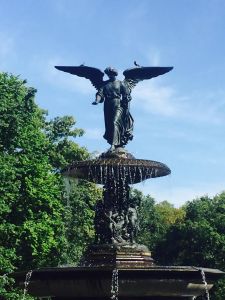 Have you ever volunteered at a race?