So yesterday I told you all about the numbers.

Ok, not all of it was fun.   I admit it.   The getting up before the sun really, really sucks.   I’m always worried about oversleeping, so I set backup alarms.    Good thing too because I didn’t get moving till 4:00 and everyone was arriving at 4:30.   It was my turn to drive the clown car, so there was no being late.

I have to say if you have to get up before the sun, at least do it with friends.   One by one they arrived – Elaine, Teri, Dawn, and Mary.   Then off to pick-up Karyn who was to be the co-pilot.  I may have been the wheels but I had no clue as to where I was going.   Luckily, Karyn works in Brooklyn and Elaine used to live there.    I literally just went where I was told to go and when I got there I made Karyn park as I’m not that good at parallel parking.  It’s really not required where I grew up.  She thought I was kidding until I jumped out of the car and made her do it.

Since this wasn’t a normal out and back run, we had to decide if we should park at the start or park at the finish line.   There was some back and forth as to which way to go.  We decided to park at the start.   Since parking appears to always be a concern in the city, we allowed for plenty of time to get there.    We actually got through security and in our corrals before 6:30.   Yes, we had to wait but waiting is better than stressing out if you will make it to the start on time.   It wouldn’t have been such a long wait if we were in Corral 1, but Corral 2 didn’t start till 7:45 sot that added some time.  Although both Karyn and Mary were in the first corral.  That being said at least we had the backdrop the the Brooklyn Museum looking very prestigious even with a line of port-a-potties in front of it.   I am by no means knocking them either as I was very happy to have them. 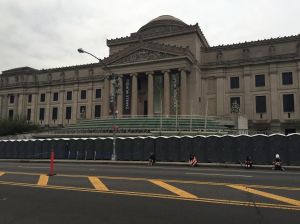 I will say that I was impressed with the security and ease of it at the start too.   We had to go through medal detectors and only runners were allowed in the corral area.   Then there were all of the police that you saw and even those that you didn’t.  There were the ones on top of the Brooklyn Museum with binoculars.   I liked it.   I liked it a lot.   If made me feel warm and fuzzy like we were being watched over especially with the sentencing for the Boston Marathon Bombing just taking place.  I don’t dwell on the what could happens of this world, but it is good to know that those that should were prepared. 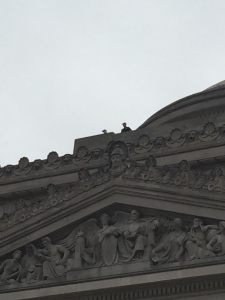 Then there was the actual race.   As you know I’m not a city girl.   My sister who used to live in NY and I visited all of once in all the years she lived there (in my defense my boys were much smaller) jokes about how often I visit the city now that she is in California.   Although she does love that I am finally broadening my horizons as I am not as much as a traveler as her.   Anywho, I have seen a lot of the city and I like it.   I think what is nice is that I’m seeing more than the tourist destinations.   There is something to be said about running through a city.    It is kind of cool to be running down a road that on any given day would be hard to even cross. 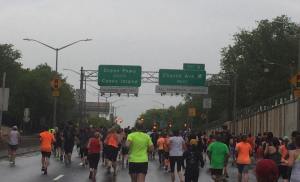 What I love about going in with the women I go in with is that once the actual race starts, we all know we have to do the race we want to do.   We all follow the motto, “your race, your pace.”   Not to say that we haven’t run together, but this was not to be the case this day.   We all had our own ideas of what we wanted to do.   If you were here yesterday, you know what my plan was already.  Then at the end even with 26,000 people we come back together. 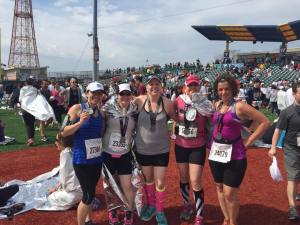 I would do this race again.  It was a fun race with a really nice course even if it did start raining at mile 4.   At least it was a humid day so it did feel good even when it started really raining by mile 6.   Although, I was worried about my phone as I thought we dodged the rain and didn’t properly protect my phone in a baggie.  Luckily it then cleared up.   I was happy that even in the rain I was able to maintain my pace too. .

I was also happy that I saved some energy at the end, because in a cruel twist you had to run up the ramp to get to the boardwalk which was very cool to finish on.   The music was pumping and that helped too.   When I was approaching the finish they started playing Salt N Pepper’s Push It.   This song takes me back to my Ahem party days and I will admit that I was singing it as I was running at the end.   How could you not?

Then off to collect my medal, rest some and then make our way back to the other side of Brooklyn to collect my car.   As happy as I was to be at the start in the morning, I will say it did suck having to take the subway back.  It did add at least an extra hour of travel time, but what are you going to do.   Traveling in NY is supposed to be rough, so it lived up to it’s reputation. 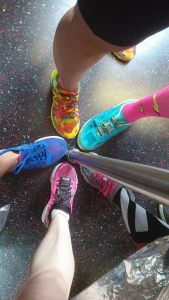 Finally we made it to the car.   After a Dunkin Donuts stop and another food stop.

I was sore at the end.   Not the I can’t move sore, but the sore that does indicate you just ran a good race and pushed yourself.   My quads were sore and my feet were somewhat sore.   Atlhough, I did not have any pain while running.   Yeah!!!     I’m wondering if it was the pace or the shoes.   I didn’t wear my inserts and I’m happy about that.   Running a half is not the way to break them in!    That being said my foot problems are not gone, but I got through the race!

Did you race this weekend?